American Military seems to be mobilizing in some very unusual, dynamic and multifaceted ways. 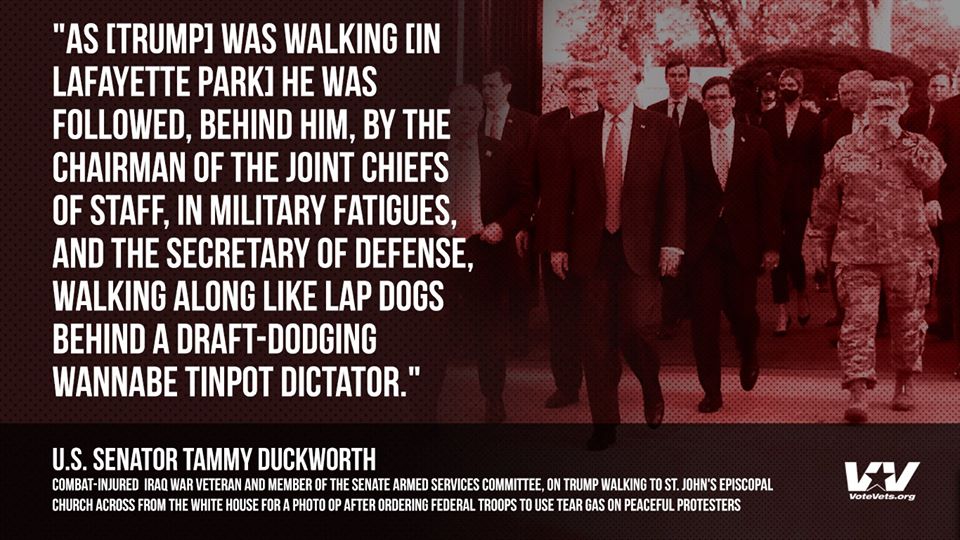 There have been some very alarming developments in Washington over the past few days. Amongst the things that have transpired is the deployment of multiple Federal Government Police groups and Regular US Military units.

In the video attached to this post US Senator Tammy Duckworth, a former colonel and combat helicopter;  pilot provides her insight into these events.

Several Senior US Generals have come out in a very direct way to publish official statements which  confront  US President Donald Trump's recent actions against US Citizens protesting in Washington D.C. and other Cities in the US.

We have never had a situation in America where management of the US Military has ever been in question. However, if you've been following the news over the past few days you should know several things. As of tonight Donald Trump has ordered the White House encircled (enclosed) with heavy duty metal fencing and concrete barriers that completely encircle several entire blocks around the White House. And;

there is a small 'war of words' being waged between Trumps White House; including in their official capacity, William Barr the appointed head of the Justice Department, Mark Esper the current United States Secretary of Defense, and Pentagon advisor James Miller, and former Senior Pentagon Brass.

If you haven't yet considered supporting an organization going into this next election, I would suggest that VoteVets is probably a good choice. All contributions are managed tru "Actblue.com" which got its start in 2004; handled fundraising for Bernie Sanders in 2016 and 2020 and is handling fundraising for Joe Biden for 2020. In the Month of May ActBlue raised 18 Million Dollars the week after the George Floyd murder for various needs including legal fees, bail for protestors, etc..

VoteVets.org is a political action committee (PAC) and 501(c)(4) nonprofit organization in the United States. It was co-founded in 2006 by Jon Soltz and Jeremy Broussard.

Initially composed of United States Iraq and Afghanistan war veterans, the organization views defense policy as an American priority. In 2020, the stated goal of the PAC is to elect veterans to public office that "fully support our men and women in uniform." According to the group's website, the group is backed by over 700,000 supporters in 2020. In February 2007, a VoteVets.org spokesman told The Washington Post that the group had 20,000 members, including 1,000 veterans of the wars in Iraq and Afghanistan.

VoteVets.org describes itself as a progressive organization, but has endorsed Democrats and Republicans for office. In media, they have been described as "closely aligned with Congressional Democrats," and "liberal" by The New York Times and The Washington Post.

To find out more about options for contributing to VoteVets specifically here is the link .